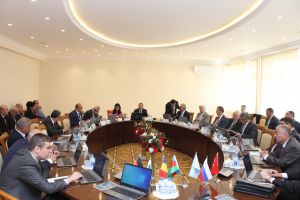 An international scientific-practical conference on "Quality assurance as a key factor in competitive economic development" dedicated to the 99th anniversary of national leader Heydar Aliyev began at Baku Business University on May 4.
Conference "Priorities for efficient use of resources in competitive development", "Provision of quality financial and accounting information in competitive economic development", "Linguistic quality assurance: priorities for mutual development of language and economy", "Some topical issues of teaching mathematics and mathematical sciences", "Free from occupation" Qualitative directions of the organization of social work in the given territories ”.
Opening the event, Rector of the University, Doctor of Economics, Professor Ibad Abbasov said that the purpose of the conference is to identify the main priorities of quality assurance, efficient use of resources and social development in competitive economic development. Along with well-known scientists, researchers and specialists of our republic, scientists and researchers from 6 foreign countries are taking part in the international conference.
Ibad Abbasov stressed that a strong economy means a strong state based on strong social welfare. The main pillars of any state are a strong economy. A strong economy is expressed not only in quantity but also in quality. A quality economy means a sustainable and sustainable economy. Today, the world economy has entered a new stage of development. In the new stage of world economic development, the rapid development of innovative technologies and technological processes, which are the main features of the IV Industrial Revolution, and the rapid digitalization processes in a number of sectors of the economy are considered qualitative factors of modern economic development.
The rector of BBU noted that achieving sustainable and competitive economic development is one of the priorities of the state's economic policy. To this end, the implementation of important issues such as ensuring sustainable and comprehensive economic growth, expanding the digital economy, creating an innovation environment, the formation of competitive human capital is of particular importance.
The head of the Yasamal District Executive Power Elshad Hasanov spoke about the historical services of the great leader Heydar Aliyev in the development of the Azerbaijani economy. He noted that both during the Soviet era and during the years of independence, the National Leader has done unprecedented work for the development and progress of our people and our republic. The political course of the Great Leader is successfully continued by President Ilham Aliyev. This policy continues to bring success to Azerbaijan. Victory in the 44-day Patriotic War under the leadership of Supreme Commander-in-Chief Ilham Aliyev was based on a strong economy. The correct economic policy pursued by President Ilham Aliyev also allowed to strengthen our army. After the victory, we have new goals. I believe that the reconstruction of the economy in our liberated lands will further increase the economic strength of our country, and we will achieve all the goals set in this direction.
MP Ziyad Samadzadeh, a full member of the Azerbaijan National Academy of Sciences (ANAS), Doctor of Economics, Professor, spoke about the importance of the conference. He said that a well-thought-out economic policy increases the country's economic power. In order to form a national economic policy, it is necessary to improve the policy of industrialization, taking into account the trends of globalization. Speaking about the use of the economic potential of the liberated territories, Ziyad Samadzadeh drew attention to the existing realities and prospects.
Director General of the Institute of Economics of ANAS, Doctor of Economics, Professor Nazim Muzaffarli presented a study on "Regional economic development and diversification in Azerbaijan" conducted jointly with Associate Professor Allahyar Muradov. He noted that the study compares the level of economic development of the regions of Azerbaijan only on the basis of a static approach, ie indicators that reflect the actual state of the economy. In this case, neither the speed of economic development (for example, the rate of economic growth) nor the factors determining economic development (for example, investments in fixed assets) are not taken into account. The sectoral diversification of the regional economy is calculated based on the connection between industry, agriculture, construction and services. In order to assess the sustainability of the economy in the regions of Azerbaijan, the level of sectoral diversification was studied, using the "equal share" approach. Based on this approach, a sectoral diversification sub-index was calculated for each economic region, republican city and administrative region. However, taking into account the sectoral characteristics of economic activity in the cities, a slightly different approach was applied to the 5 republican cities.
Other speakers touched upon the topicality of the conference. They stressed that the discussions, opinions and proposals voiced at the conference will contribute to the identification of priorities for the efficient use of resources in competitive development.
The conference continued with section meetings.