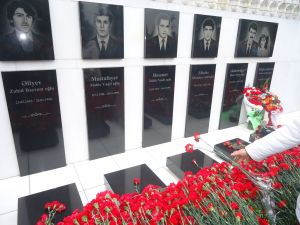 On January 18-20, 2014, a series of events related to the 20th anniversary of 20th January tragedy were held in Baku Business University. Thus, an exhibition was organized dedicated to the victims of the tragedy. Also, rector of the university, Prof. Dr. I.M.Abbasov opened the commemorative ceremony dedicated to martyrs by the opening speech and informed attendees about incidents committed on the night of 19 to 20, 1990 at the conference hall of the university. Memory of the victims will be commemorated with a minute of silence. Then, a documentary film was demonstrated, dedicated to the 20th January tragedy.

Teaching staff and students of BBU were attended at the funeral held in front of memorial complex erected to the commemorate of martyrs near the station “20 January” on January 20, 2014.